‘At that moment, he became aware of a network of lines, standing out like glowing wires all over the surface of the country…’  John Michell in his introduction to the 1974 edition of The Old Straight Track (first published 1925) describing Alfred Watkins’s ley lines epiphany in the Herefordshire countryside. (Robert Macfarlane elaborates on this here.)

‘The lines between man, computer, and environment are purely artificial, fictitious lines. They are lines across the pathways along which information or difference is transmitted. They are not boundaries of the thinking system. What thinks is the total system which engages in trial and error, which is man plus environment.’ Gregory Bateson

‘The straight line has long been deployed by aesthetic walkers. Rather than following contours or increasingly institutionalized pathways […] the disruptively-applied straight line interrupts passivity and crosses boundaries, beating back at the beaten track.’ Phil Smith (2010) The Contemporary Dérive

The route of the Trans-missions walk across Herefordshire is far from a strictly and ‘straightly’ linear one (in a direct-here-to-there-by-the-quickest-route kinda way). I long ago decided that literally following the route of pylons – i.e. by trespassing along the ground underneath them, crawling under or battling over the hedges or streams or other landscape features that they stride across so effortlessly – was a kind of provocative activism that doesn’t really fit the ‘polite activist’ mould of what I do. That’s for another kind of tracktivism which someone with more brazen charm than I possess might be able to carry off. (I’m sure it would provoke some interesting conversations, though very possibly expletive laden ones, with irate landowners). So I will be walking along the rights of way and roads that most closely follow their route across the county of Herefordshire west to east.

But, still, by my meandering, tangential, quixotic, radial or circambulating standards, it’s still the most linear walking performance I’ve done.

If you start thinking enough about lines (or read inspiring anthropologist Tim Ingold’s 2007 book on the subject), you start feeling a bit like you are existing in a paranoid hallucination: lines are everywhere, everything you do or speak or make is a line, you are made up of lines, lines are following you. If you’re an aerial dancer, lines are holding you up in the air.

And lines form the core of us as humans:

‘Chordates, creatures like fish, reptiles and mammals including humans – all have a central axis or line. Feeling the potency of this line is one of the central points of many of the body disciplines and spiritual traditions that are woven into human history.

Yoga and Zen Buddhism are just two of the human traditions that point to the value of feeling a “line”. 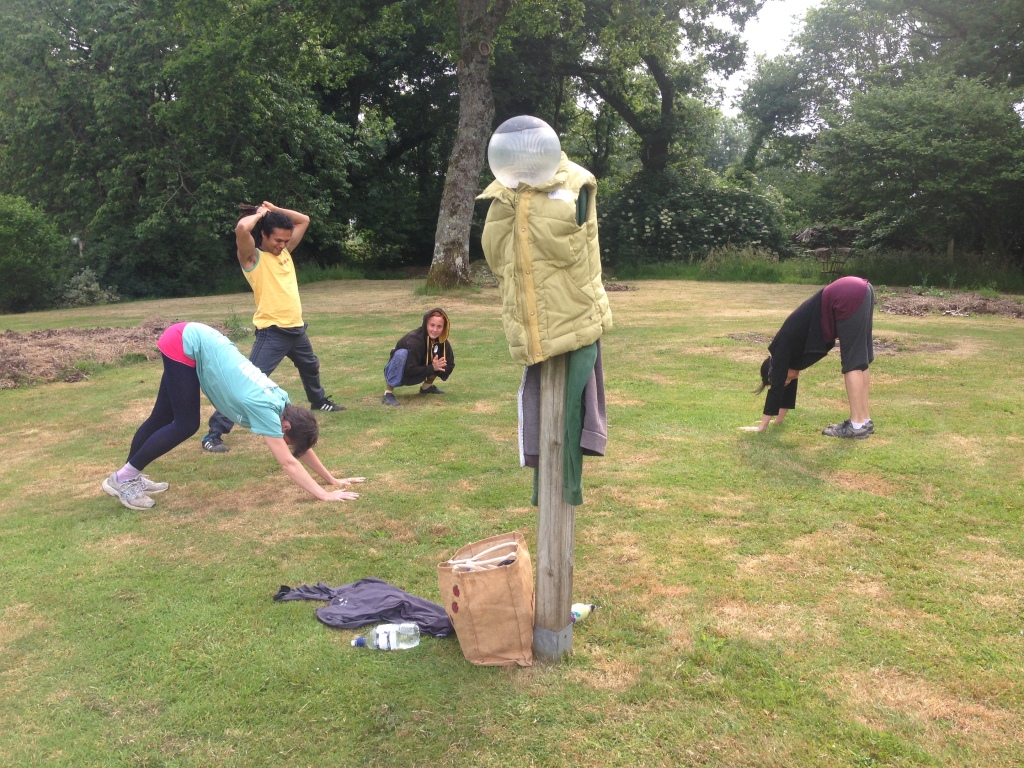 These traditions use the concept of line to orient to gravity, upright, with the bottom end of the spine pointing toward the ground and the top of the head pointing toward the sky… We appreciate the power of the line to determine and hold form… The evolutionary story illustrates how the impulse to move in a direction brought with it enormous consequences.’ Caryn McHose How Life Moves (2006)

I could think (negatively) of the ecologically-destructive behaviour that results from the ‘consequence’ of our own evolution as a species into our current form, but with Trans-missions, I’m honestly trying to be cheerful, to see the beauty in humanity and make it resonate along the less visible, less tangible lines that connect us through hope or intention.